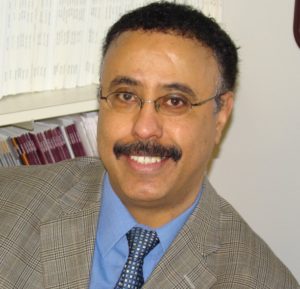 Mustafa al’Absi is a Professor in the Department of Family Medicine and Biobehavioral Health, and he is the holder of the Max & Mary La Due Pickworth Endowed Chair at the University of Minnesota Medical School. He serves as an adjunct professor in Psychiatry and in Epidemiology, and as a graduate faculty member in the Departments of Neuroscience, Physiology and Pharmacology, and Integrated Biological Sciences. Dr. al’Absi directs the Behavioral Medicine Laboratories at two sites of the Medical School (Duluth and Minneapolis); and he is the current Director of the Duluth Global Health Research Institute (DGHRI). Dr. al’Absi completed his undergraduate training at Cairo University and his doctoral training at the University of Oklahoma in biological and clinical psychology with specialization in behavioral medicine.

The primary goal of Dr. al’Absi’s research program has been to elucidate biobehavioral mechanisms by which stress and early life adversity play a role in addiction and appetite regulation, and to use this knowledge to develop and tailor interventions. His research integrates basic, laboratory, and clinical methods. He has published more than 200 scientific articles and two books. His early research focused on stress mechanisms related to risk for heart disease, pioneering lab and field studies using an array of lab and natural stressors as well as pharmacological challenges in human studies. While funded by NHLBI and AHA, he focused on defining the mechanisms of hypoalgesia and stress response alterations as intermediate endophenotypes of hypertension. This early research helped him develop a keen appreciation for the role of the stress response in shaping how we process and respond to subsequent stressors or emotional challenges, including things like pain and withdrawal symptoms. To that end, Dr. al’Absi has focused on the significance of stress response alterations in multiple clinical conditions including addiction.

An important, replicated finding from his program is the blunted hormonal stress response among individuals with stimulant addiction, which manifests itself as enhanced basal pituitary-adrenocortical activity and decreased response to a range of stressors. This dysregulated pattern of response predicts early addiction relapse. He is currently examining the role of endogenous opioids and cannabinoids in the blunting of the stress response in nicotine and cannabis users. He has also examined the extent to which blunted hormonal response predicts changes in dietary intake, weight, and relapse. Defining these links will inform future models for targeted treatment to address weight gain as an impediment for smoking cessation. Dr. al’Absi has also been leading efforts to improve methods for assessment of stress and substance use in the field by developing innovative and unobtrusive high-tech methods to collect physiological and contextual data in natural settings using wearable sensors. The goal is to obtain continuous, real-time measures of stress and addiction and to leverage this information to apply just-in-time intervention.

Dr. al’Absi’s research program has been funded by multiple R01 grants from NIDA and NCI and by Grant-in-Aid from the American Heart Association (AHA) as well as grants from the University of Minnesota and the International Brain Research Organization (IBRO). He has also received a Smart Health and Wellbeing award from the National Science Foundation (NSF). He was recently funded by an NIH/NIDA R01 to examine the effects of stress on risk for smoking relapse in smokers who also use cannabis and another R01 award to examine the role of the endogenous opioid system in stress response dysregulation associated with addiction.

Dr. al’Absi has received multiple awards including the Neal E. Miller Award, the Herbert Weiner Award, the NIDA Award of Excellence in Collaborative Research, and the Hans Selye Lectureship from WASAD. He is currently a Fellow of the Association for Psychological Sciences and the Academy for Behavioral Medicine, the Association for Psychological Sciences (APS), and the Society for Research on Nicotine and Tobacco (SRNT). He is a former fellow of the John D. and Catherine T. MacArthur Foundation Mind-Body Network.

Dr. al’Absi has served in several national and international leadership positions, including serving as president of the American Psychosomatic Society (APS), executive council member and chair of membership committee, Academy for Behavioral Medicine Research (ABMR), president of the Africa & Middle East Congress on Addiction (AMECA), and board member of the Society for Psychophysiological Research (SPR). He also serves on the UNODC-WHO Informal Scientific Network (ISN). He has served as a guest editor for Biological Psychology and Psychosomatic Medicine; and he has served as associate editor for Psychophysiology and Biological Psychology. He served as a standing member on the NIH “Mechanisms of Emotion, Stress, and Health” Study Section and he has severed on many other NIH, VA, and NSF review panels.